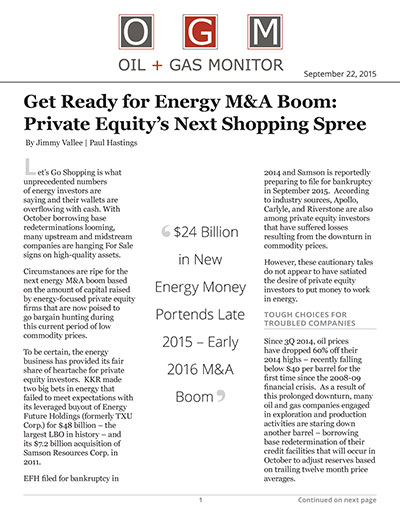 Let’s Go Shopping is what unprecedented numbers of energy investors are saying and their wallets are overflowing with cash. With October borrowing base redeterminations looming, many upstream and midstream companies are hanging For Sale signs on high-quality assets.

Circumstances are ripe for the next energy M&A boom based on the amount of capital raised by energy-focused private equity firms that are now poised to go bargain hunting during this current period of low commodity prices.

To be certain, the energy business has provided its fair share of heartache for private equity investors.  KKR made two big bets in energy that failed to meet expectations with its leveraged buyout of Energy Future Holdings (formerly TXU Corp.) for $48 billion – the largest LBO in history – and its $7.2 billion acquisition of Samson Resources Corp. in 2011.

EFH filed for bankruptcy in 2014 and Samson is reportedly preparing to file for bankruptcy in September 2015.  According to industry sources, Apollo, Carlyle, and Riverstone are also among private equity investors that have suffered losses resulting from the downturn in commodity prices.

However, these cautionary tales do not appear to have satiated the desire of private equity investors to put money to work in energy.

Since 3Q 2014, oil prices have dropped 60% off their 2014 highs – recently falling below $40 per barrel for the first time since the 2008-09 financial crisis.  As a result of this prolonged downturn, many oil and gas companies engaged in exploration and production activities are staring down another barrel – borrowing base redetermination of their credit facilities that will occur in October to adjust reserves based on trailing twelve month price averages.

For cash-strapped companies already struggling to maintain production and reserves while continuing to make interest payments on their outstanding indebtedness, redetermination of their borrowing base will present a critical dilemma – sell assets to restore liquidity or go bankrupt.

During the same period in which commodity prices have fallen, Natural Gas Partners, Blackstone, First Reserve, EnCap Investments, Quantum Energy, and Energy Spectrum – just a handful of the names you know in energy private equity – have closed new funds exceeding $24 billion in the aggregate to make big investments in the energy sector.

Consequently, there seems to be an abundance of private equity “dry powder” actively looking for good energy deals.  The convergence of excess capital with the marketing of cheap assets by troubled companies should drive a M&A boom in the E&P sector in the latter part of 2015 and well into 2016.

M&A activity should also pick up in the midstream sector, which is dominated by publicly traded partnerships – commonly known as a master limited partnerships or MLPs – and private equity-based midstream businesses.

Recently, the midstream M&A market has been highlighted by a trend to simplify organizational structures and reduce or eliminate MLP sponsors’ claims on cash flow, thereby reducing capital costs to midstream MLPs.  Kinder Morgan, Williams, Crestwood and Energy Transfer have all engaged in transactions to consolidate their structures in some manner, and the trend accelerated during the downturn.

The dramatic drop in commodity prices has resulted in lower volumes being gathered, processed, transported and marketed by midstream companies since their upstream counterparts continue to curtail production.  However, there are not many regions of the country where new midstream opportunities exist with significant upside.

Private Equity Not the Only Energy Players

Private equity investors aren’t the only players buying up energy assets at what is believed to be bargain prices.  In August 2015, activist investor, Carl Icahn, announced two separate billion dollar bets in the energy sector, purchasing an 8.5% position in Freeport-McMoRan Inc. and an 8.2% position in Cheniere Energy Inc.

Since the announcement of Icahn’s investment, Cheniere agreed to appoint two Icahn-affiliated directors to its board.  Cheniere also appears to be amenable to working with Icahn to determine how to deploy the company’s excess cash flow that it expects to start generating in 2017 from its natural gas export operations.