The New Movers and Shakers: Are These Superstar Lawyers Bigger Than Their Firms? 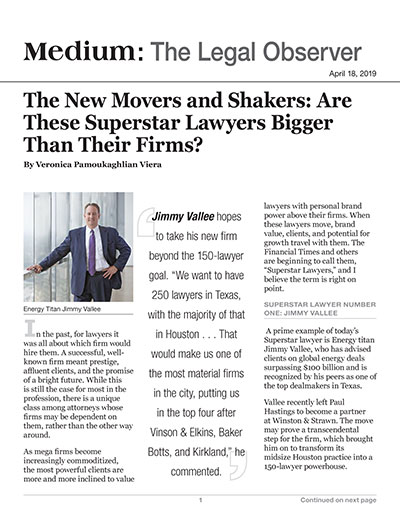 In the past, for lawyers it was all about which firm would hire them. A successful, well-known firm meant prestige, affluent clients, and the promise of a bright future. While this is still the case for most in the profession, there is a unique class among attorneys whose firms may be dependent on them, rather than the other way around.

As mega firms become increasingly commoditized, the most powerful clients are more and more inclined to value lawyers with personal brand power above their firms. When these lawyers move, brand value, clients, and potential for growth travel with them. The Financial Times and others are beginning to call them, “Superstar Lawyers,” and I believe the term is right on point.

A prime example of today’s Superstar lawyer is Energy titan Jimmy Vallee, who has advised clients on global energy deals surpassing $100 billion and is recognized by his peers as one of the top dealmakers in Texas.

Vallee recently left Paul Hastings to become a partner at Winston & Strawn. The move may prove a transcendental step for the firm, which brought him on to transform its midsize Houston practice into a 150-lawyer powerhouse.

The energy-focused M&A lawyer and author of the bestselling analysis of the oil and gas industry, Giant Shifts (Sutton Hart Press), told reporters that he is committed to recruiting for his new firm. “I think members of my team will be joining soon,” Vallee said.

It is not surprising that Winston went after Vallee, who is well known for foretelling the industry’s future in his public appearances. Last year he advised EnCap Flatrock-backed Lotus Midstream on an acquisition deal with a total value of $2.6 billion, counseled Velocity Holdings in a $442-million deal, and advised Osprey Energy through an Eagle Ford shale property purchase and $894-million company creation.

Vallee is an interesting case of someone who is being brought on not only to contribute his powerful brand and his client portfolio, but also to inspire other top lawyers to follow in his footsteps. With this synergy, Vallee hopes to take his new firm beyond the 150-lawyer goal. “We want to have 250 lawyers in Texas, with the majority of that in Houston . . . That would make us one of the most material firms in the city, putting us in the top four after Vinson & Elkins, Baker Botts, and Kirkland,” he has commented.

Vallee´s intentions are clear: he wants to dominate Texas, and that is precisely the reason Winston & Strawn hired him. Freed from some conflicts of interests that impeded his work with certain A-list clients during his time at Paul Hastings, Vallee plans to expand Winston’s services in many directions. He has referred to the projected boost to his new firm as a “steroid shot.”

Vallee’s strategic move will help Winston target middle market private equity, the kind that falls out of the sphere of top New York firms, a segment Vallee believes Winston is poised to dominate. “I think [Winston] will be one of the winners in the market,” he told reporters.

With 22 offices worldwide, Vallee’s previous employer, Paul Hastings, was a great place to be. Ranked among American Lawyer’s top 10 US law firms eight years in a row and among the top 5 “Overall Best Law Firm[s] to Work For” in Vault’s survey six years in a row, the firm is really at the top of its game. And yet, there is a moment in a Superstar lawyer’s career when the traditional and often stale environment of a top firm no longer allows them enough room for growth. At that point, they must simply move on.

Scott Barshay and the End of the Old World

That is exactly what happened to Public Company M&A Lawyer Scott Barshay, who has advised clients in $300-billion worth of transactions in a single year. His deals generated over $100 million for his former employer, Cravath, Swaine & Moore, but he felt that he was not reaping the rewards he deserved.

Superstar lawyer that he is, Barshay immediately had an offer from competing firm Paul, Weiss, Rifkind, Wharton & Garrison. In 2016, after his best year ever, he said goodbye to Cravath, the only firm he had ever worked for.

His new firm didn’t offer him a $10-million-a-year package for nothing. Barshay brought with him coveted clients such as Qualcomm and Kraft Heinz.

But the industry had seen nothing like this back in 2016, when the move took place. At the time, Cravath believed business would continue as usual, but in 2017, the firm lost two more partners to attractive offers from competitor Kirkland & Ellis.

Traditional firms, which include some of the most prestigious in the country, have a system that rewards how long a partner has been with the firm over the revenue they personally bring.

The issue of how partners get paid was called into question when the highly competitive Barshay decided to leave Cravath, a firm with 200 years of history. The logic behind the lockstep payment system, which is common at this type of firms, is that senior partners are more likely to involve top performers in high-stakes cases if they believe they also stand to profit from their success.

With aggressive competitors targeting talent, the lockstep system seems to be doomed. Unless, of course, partners whose production has faltered lose their status and salaries for non-partners become sufficiently attractive. The alternative are “eat what you kill” firms where it is easier to go down, but also easier to go up. In the current scenario, a top performer who is not afraid of a dynamic, competitive environment is probably better off at this type of firm. After all, it was one of those firms, Kirkland, that became the highest grossing law practice on the planet, with $3 billion in earnings, in 2017.

Wheeler, Higgings, and The Dream Team

Wheeler, who has been instrumental in $28.6-billion worth of securities offerings, is, much like Vallee, a top Energy M&A lawyer. When asked about the reasons for his move, he told Texas Lawbook, “I was happy at Latham, but I admired what Kirkland had accomplished, going from zero lawyers in Texas in 2014 to over 150 now . . . my analysis was Kirkland . . . has great people and great capital markets opportunities for me.”

In his new firm, Wheeler is working on growing both the capital markets practice and the strategic M&A practice. “I think I have something to offer in both those areas,” he commented. “Their private equity practice is phenomenal, and I might participate in that as well.”

If Wheeler seems to have been looking for a more dynamic environment, David Higgins left his former firm, Freshfields Bruckhaus Deringer, even after it changed the payment system to better reward top earners. In this case, the Superstar lawyer did not only move firms, he also moved overseas, as Kirkland named him co-managing partner for its London operations.

No wonder Kirkland was willing to shell out $10 million annually to bring Higgins on board. A private equity heavyweight, Higgins has advised clients, like Hellman & Friedman and The Carlyle Group, on several multi-billion-dollar acquisitions.

Reporting on Higgins’ move, a British journalist referred to Kirkland’s attorney-lineup as “the most expensive team of star lawyers in UK legal history.” Kirkland’s chairman said the new-hire brought with him “a combination of business leadership, commercial awareness, and experience on top tier transactions which will enable [Kirkland] to continue to develop [its] European private equity platform.”

Much like in Vallee’s planned expansion of Winston, Higgins was soon followed by former Freshfields colleague Adrian Maguire. “There is a massive encouragement on A players hiring A players,” a Kirkland partner explains, “even though we have a superstar, David Higgins, he will still bring in Adrian Maguire.”

Judging from Kirkland’s success and Superstar lawyers’ increasing visibility, this new class of attorneys is here to stay. In the British press, they are often compared to the Barcelona soccer team’s superstar players: they play for the team, but they are just as valuable elsewhere, and sometimes even more so.

For Elite Lawyer Management’s Jay Jessup, who works with some of the top lawyers in the US, the industry is ripe for change. “Historically there have always been a handful of rainmakers at every large law firm,” he said in a statement. “What’s new and trending is a much larger number of lawyers are building powerful portable personal brands using social media, publishing, and the resulting media attention to build authority in their field. The net result is a very loyal community of clients that hire the lawyer and their firm — in that order.”