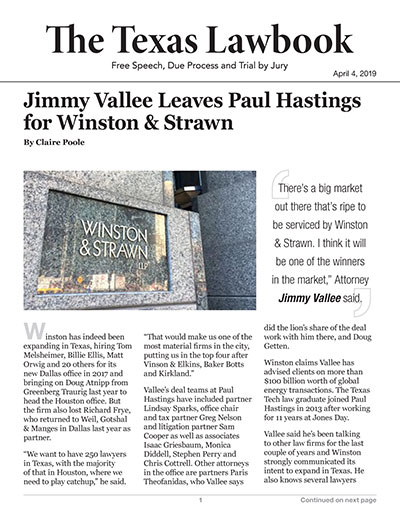 Winston has indeed been expanding in Texas, hiring Tom Melsheimer, Billie Ellis, Matt Orwig and 20 others for its new Dallas office in 2017 and bringing on Doug Atnipp from Greenberg Traurig last year to head the Houston office. But the firm also lost Richard Frye, who returned to Weil, Gotshal & Manges in Dallas last year as partner.

“We want to have 250 lawyers in Texas, with the majority of that in Houston, where we need to play catchup,” he said. “That would make us one of the most material firms in the city, putting us in the top four after Vinson & Elkins, Baker Botts and Kirkland.”

Vallee’s deal teams at Paul Hastings have included partner Lindsay Sparks, office chair and tax partner Greg Nelson and litigation partner Sam Cooper as well as associates Isaac Griesbaum, Monica Diddell, Stephen Perry and Chris Cottrell. Other attorneys in the office are partners Paris Theofanidas, who Vallee says did the lion’s share of the deal work with him there, and Doug Getten.

Winston claims Vallee has advised clients on more than $100 billion worth of global energy transactions. The Texas Tech law graduate joined Paul Hastings in 2013 after working for 11 years at Jones Day.

Vallee said he’s been talking to other law firms for the last couple of years and Winston strongly communicated its intent to expand in Texas. He also knows several lawyers who joined the Dallas office from his former firm Jones Day, including capital markets partner Charlie Haag.

“It just became clear to me, and I’ve talked with a lot of firms, that Winston had the most commitment to develop the Texas market,” he said.

Vallee said he thinks he can double, triple or even quadruple his practice, as he couldn’t work with some clients at Paul Hastings due to conflcts. He added that the increased breadth of Winston’s service offerings will attract others. “It’s going to be quite a steroid shot,” he said.

The lawyer noted that Winston is a little more targeted to middle market private equity, which high-priced New York firms aren’t able to capture. “Look at Kirkland, which services big box private equity,” he said. “There’s a big market out there that’s ripe to be serviced by Winston & Strawn. I think it will be one of the winners in the market.”

Winston has indeed been expanding in Texas, hiring Tom Melsheimer, Billie Ellis, Matt Orwig and 20 others for its new Dallas office in 2017 and bringing on Doug Atnipp from Greenberg Traurig last year to head the Houston office. But the firm also lost Richard Frye, who returned to Weil, Gotshal & Manges in Dallas last year as partner.

Paul Hastings opened its office in Houston in 2012 with Nelson, Theofanidis and Steve Tredennick, who moved to White & Case after it created an outpost last year.

Atnipp said in a statement that Vallee is recognized as one of Texas’ top energy dealmakers and has developed the knowledge and skill to craft an enviable number of megadeals during his career. “We are thrilled to welcome Jimmy to our team,” he said.

Vallee joins other deal-making attorneys at the firm’s Houston office, including Atnipp as well as partners Chris Ferazzi, Richard “Dick” Wynne and Alex Niebruegge, who was elevated to partner in December.

According to the Corporate Deal Tracker database, last year Vallee counseled EnCap Flatrock-backed Lotus Midstream on its purchase of infrastructure assets from Occidential Petroleum. Occidental collected $2.6 billion from the sale, which included assets sold to Moda Midstream, which also is backed by EnCap Flatrock.

Vallee also advised Velocity Holdings on its sale to Enable Midstream Partners for $442 million and Great Salt Plains Midstream on its purchase of Thunderbird Midstream for an undisclosed sum. Great Salt Plains is a joint venture in Oklahoma’s Stack oil and gas region with Energy Spectrum and Chisholm Oil & Gas.

Vallee is also an author, having written the book, “Giant Shifts: Energy Trends Reshaping America’s Future.” Will he write another? Doubtful at this point in time.

“The publisher wants me to do another book, but that was an awful lot of work,” he said. “I’m totally focused on converting my clients and quadrupling the practice here.”